Bees have an impressive array of different life histories – from the highly complex and industrious colonies of honey bees, to lonesome solitary bees that play the role of queen, nurse, and defender of the nest.  Bumble bees fall close to honey bees and are classified as “eusocial” bees.  This means that they have a colony, like honey bees, as well as a queen that produces all of the offspring of the nest and workers that take care of finding food, caring for developing bees, and defending the nest.  However, bumble bee colonies do not survive for multiple years (i.e. perennial).  Instead, the colonies are annual, with queens emerging in spring, and producing new queens that same fall which will found new colonies of the following year.  The overall goal of a bumble bee colony is to bring in as much pollen and nectar as is possible, ensuring the production of many new queens and males at the conclusion of the season. 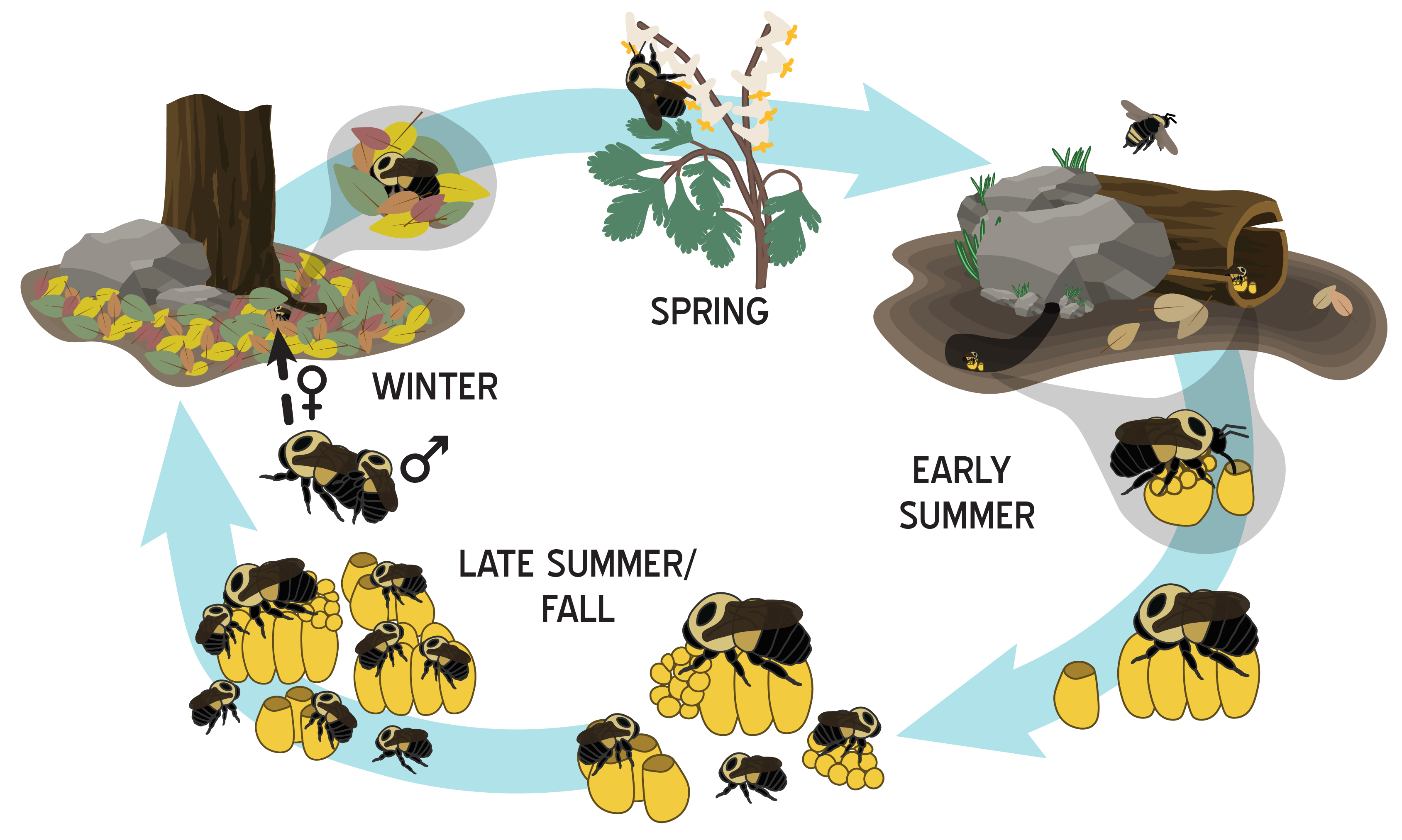 Queens that have overwintered emerge – typically in mid to late April and early May.  Queens now are essentially solitary – founding a nest and provisioning it with pollen and nectar.  She first creates wax pots from glands on her abdomen – in which she stores nectar.  Finally, she lays her first crop of eggs into the pollen balls she has brought back, creating a “brood clump”.  The queen will rear the first round of female worker bees alone – having to forage for food, incubate the brood clump, defend the nest, and feed herself.  The eggs hatch into larvae, resembling maggots, and progress through several larval stages before spinning a cocoon and completing the transformation, called metamorphosis, into adult workers.

The first workers emerge from their silken cocoons 2-3 weeks after being laid as eggs, and take over the duties of searching for food, caring for brood, and defending the nest.  From hereon out, the queen will remain inside the colony laying eggs and caring for brood.  The nest is incubated, with temperatures hovering consistently around 30C even when the outside temperature is far colder, even down to 0C.

Colonies are typically at their maximal size, ranging from 30 to upwards of 400 individuals (depending on the species).  At this point, the queen begins to lay unfertilized eggs, which will develop into males, called drones, and workers will begin to rear fertilized eggs into new queens, called gynes.  Drones and gynes leave the nest and mate.  Worker production at this point has typically ceased, and the workers and founding queen will all die out naturally, leaving only the newly mated gynes.  The switch point to making reproductives (drones and gynes) ranges in time depending on the species, occurring as early as late June, and as late as August-September.

Mated gynes will build fat reserves and locate a suitable location for overwintering – usually digging into loose soils and thatch.  Gynes then enter diapause by synthesizing alcohol molecules (similar to antifreeze) to protect their cells and organs from freezing.  A typical slumber ranges from 6-9 months.

Bumble bees are known as “cavity” nesting bees – a sort of catch all category for nesting habits that encompasses areas like tussocky grass, cavities in rock/talus, and even rodent borrows.  Truthfully, we still do not know much about the nesting habits of many bumble bee species, including the criteria they use to select their nests, where they tend to be located, and the success rate of founding queens.

Occasionally, we find nests near woodland edges where there also tends to be a lot of fallen timber and rodent borrows.  When the first bumble bees emerge in the late spring, you can observe nest searching behavior of new queens.  Look for them flying low over the ground, stopping occasionally to explore cavities and borrows.  Occasionally, they’ll disappear underground for several minutes only to resurface having decided the caverns below were unsuitable for their nest.

Congratulations!  You have created, intentionally or not, suitable bumble bee nesting habitat.  Typically, bumble bees are very docile – provided you do not disturb their nest.  We recommend that you simply leave them be.  If they are in a location that is impossible to leave undisturbed, such as near a frequently used entrance or storage area, you can contact pest management companies to have them removed.  If you’re near Madison, please contact us and we can come and relocate their nests to ensure that they have a chance to finish their life cycle.