There has been a surge of media coverage both in United States and across the world concerning bee declines. Many of the headlines feature apocalyptic statements regarding bee populations, honey bee losses, and the threat these pose to our food security worldwide. Indeed, recent research has found that an alarming number of bee species are in decline across the US, while some are thought to have gone extinct. While a lot of the media focus has been on honey bees, it is the wild bees (like bumble, mason, and mining bees) that face the greatest threat. Perhaps best studied of these, bumble bees are a key indicator species helping us to gauge the extent and severity of bee declines more generally. While some species of bumble bee are doing quite well, the outlook for a majority of species is alarming.

In 2017, a key breakthrough for bumble bee conservation occurred. After a widespread public campaign, the rusty-patched bumble bee (Bombus affinis) became the first federally protected bee species under the Endangered Species Act.  The reason for the effort to get it listed?  Rusty-patch, along with several other species, had all but disappeared from regions where they were once common. 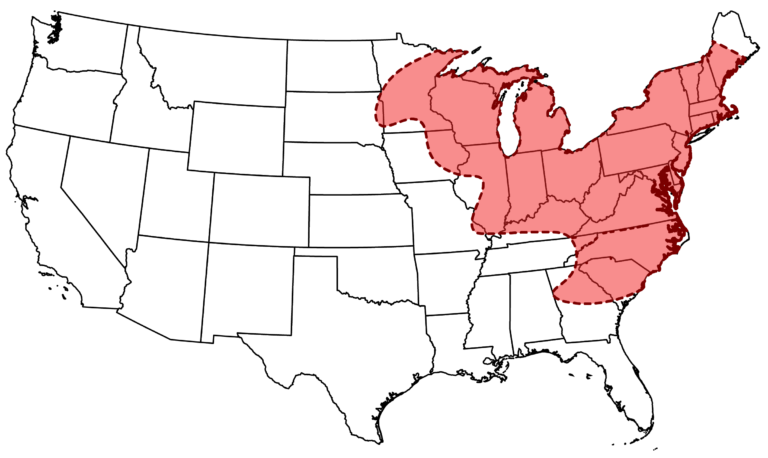 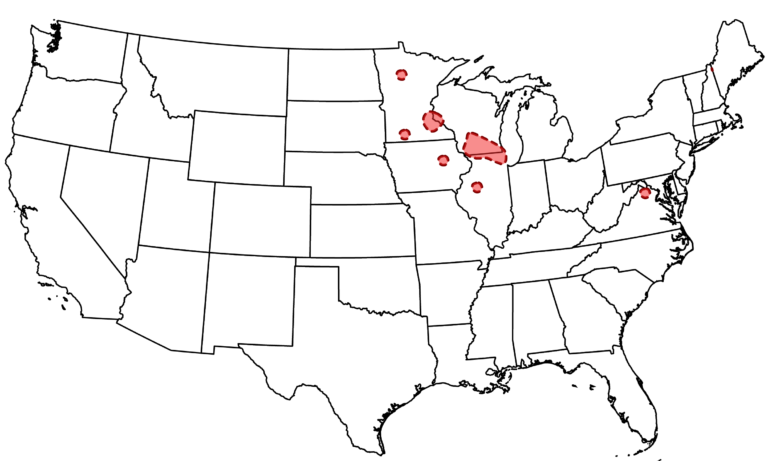 Why are some bumble bee populations dwindling?  Are we using too many pesticides?  Are new diseases infecting bumble bees?  Are there too few flowers in the landscape for them?  Is climate change to blame?   While media headlines tend to suggest single causative agents for bee declines, it is more complicated than many news stories let on.  Research over the last ten years has implicated all of the previously mentioned factors, together creating a tangled web of interacting agents.

While a number of species are declining, others seem to be relatively stable or even increasing.  Are stable species better at adapting to the heavily modified human landscapes they occupy?  Do they have a wider diet breadth that allows them to feed on invasive flowering plants and nutritionally poor, but abundant crops?  All of these questions are currently being examined by research groups both at the UW and elsewhere.  As we begin to gather evidence, our toolbox of strategies that could help rebuild bumble bee habitat grows.  Concerted efforts locally, regionally, and nationally have helped bring the plight of bumble bees to the forefront of animal conservation.  Overall, we are optimistic that we can begin to reverse the downward trend of species like the rusty-patched bumble bee.

Here in the Midwest, the landscapes that surround us now used to look drastically different.  In southern Wisconsin, oak savanna, as well as prairie used to be abundant.  In these habitats, wildflowers were also numerous, supporting hundreds of bee species, including the bumble bees native to this region.  However, human settlements soon began popping up across the landscape, bringing with them agriculture.  As populations grew, we switched from growing a variety of crops to primarily corn, soy, and alfalfa to support a growing dairy and meat demand.  Along with that switch came the advent of herbicides – designed to eliminate pesky weeds from taking nutrients from crops in the field.

All of these changes systematically reduced the amount of wildflowers in the landscape available to bees.  Combined with a plethora of noxious, invasive weed species, native wildflower abundance has decreased markedly over the last century.  In tandem with wildflower declines, bumble bees have also suffered.  Their long window of activity during the summer requires them to have access to food from late April to early October.

Loss of flowers, generally, has been one of the key factors implicated in bumble bee declines around the world – particularly in North America and Europe.

Related to loss in wildflowers, habitat loss is another factor negatively impacting wild bumble bees.  Bumble bees need access to areas containing the nesting they need to found colonies.  The exact type of nest habitat varies by species.  Loss of natural habitat, removal of brush, and overall conversion of the landscape to a more “manicured” appearance can negatively impact bumble bee queens searching for nests.

The nesting habits of bumble bees remains one of the largest unknowns.  Finding wild bumble bee nests has proved to be very difficult, and new experimental approaches here at the UW are hoping to help shed light on the mysteries surrounding bumble bee nesting behavior.

Increasing use of pesticides across the United States remains one of the top factors in bumble bee declines.  A specific type of insecticide, neonicotinoids, have received particular attention.

Neonicotinoids are a special type of insecticide that are systemic.  Instead of killing insects by contacting them directly or having the insect ingest the chemical, neonicotinoids are applied to plants and taken up by the plant vascular system.  The chemical is then distributed throughout the plant, making plant tissues themselves toxic.  The tissues reached include the pollen and nectar, albeit in relatively small concentrations.

First developed in the early 90’s, neonics are now one of the most widely used insecticides in the United States, particularly in crops such as corn and soybeans.  The rise in popularity of these chemicals was thanks to marketing the as safer alternative to traditional, more generalized insecticides.

Because the chemicals are present in pollen and nectar, bumble bees are exposed to low doses of neonics when foraging and feeding on flowers.  Typically, the exposure they receive isn’t enough to kill them outright (though occasionally it can).  Instead, low-doses cause non-lethal effect such as reduced cognitive capacity, confusion, and navigational failure.  This exposure can lead to reduced colony success, and has been implicated in bumble bee declines.  The issues associated with neonicotinoids has lead to a partial, and pending all-out ban in European Union countries.

Just like us, insects can get sick, too!  There are a variety of different pathogens – ranging from bacteria, to viruses, to fungi – that infect bumble bees and affect their colony success.  Additionally, parasitic infections are a normal part of life for many wild bumble bees, as well.  Typically, these infections can be managed by colonies by removing affected larvae or dead bees as a form of house keeping, but when these infections are combined with other stressors such as pesticide exposure and lack of nutrition from abundant flowers, the pathogens and parasites stand a better chance of seriously impacting colony success.

Common infections of bumble bee colonies include parasitic infections from the genus Nosema (think dysentery for bumble bees), bacterial infections that can jump from honey bees, as well as viruses including the infamous deformed wing virus – also a crossover from honeybees.

The elephant in the room in most scientific studies.  Evidence for a changing climate is overwhelming and uncontested in the scientific literature.  Indeed, climate change has already been documented to affect bees in a variety of ways, most notably through changing the phenology of wildflowers and the emergence of spring bees.  Warming temperatures can advance the date that wildflowers start to bloom, as well as the date that spring bumble bee queens emerge.  However, these dates can become un-linked given temperatures that are too warm.  This can lead to queens emerging either before or after spring flowers are available.  A lack of flowers in this critical period for queens could spell disaster for founding successful colonies.

Additionally, a changing climate can affect where species are found, expanding or contracting their potential ranges based on the species thermal niche, or the area of climate that can support the species in question.  Some bumble bees are specially evolved to take advantage of cold climates (thus their insulated, furry bodies), and too warm of temperatures can cause them to overheat.

Overall, a changing climate tends to be a problem that compounds the effect of other factors such as diseases and pathogens, flower availability, and even pesticide exposure.

While a number of species are declining, others seem to be relatively stable or even increasing.  Are stable species better at adapting to the heavily modified human landscapes they occupy?  Do they have a wider diet breadth that allows them to exploit invasive flowering plants and nutritionally poor, but abundant crops?  All of these questions are currently being examined by research groups both at the UW, and elsewhere.  As we begin to gather evidence, our toolbox of strategies that could help rebuild bumble bee habitat grows.  Concerted efforts locally, regionally, and nationally have helped bring the plight of bumble bees to the forefront of animal conservation.  Overall, we are optimistic that we can begin to reverse the downward trend of species like the rusty patched bumble bee. 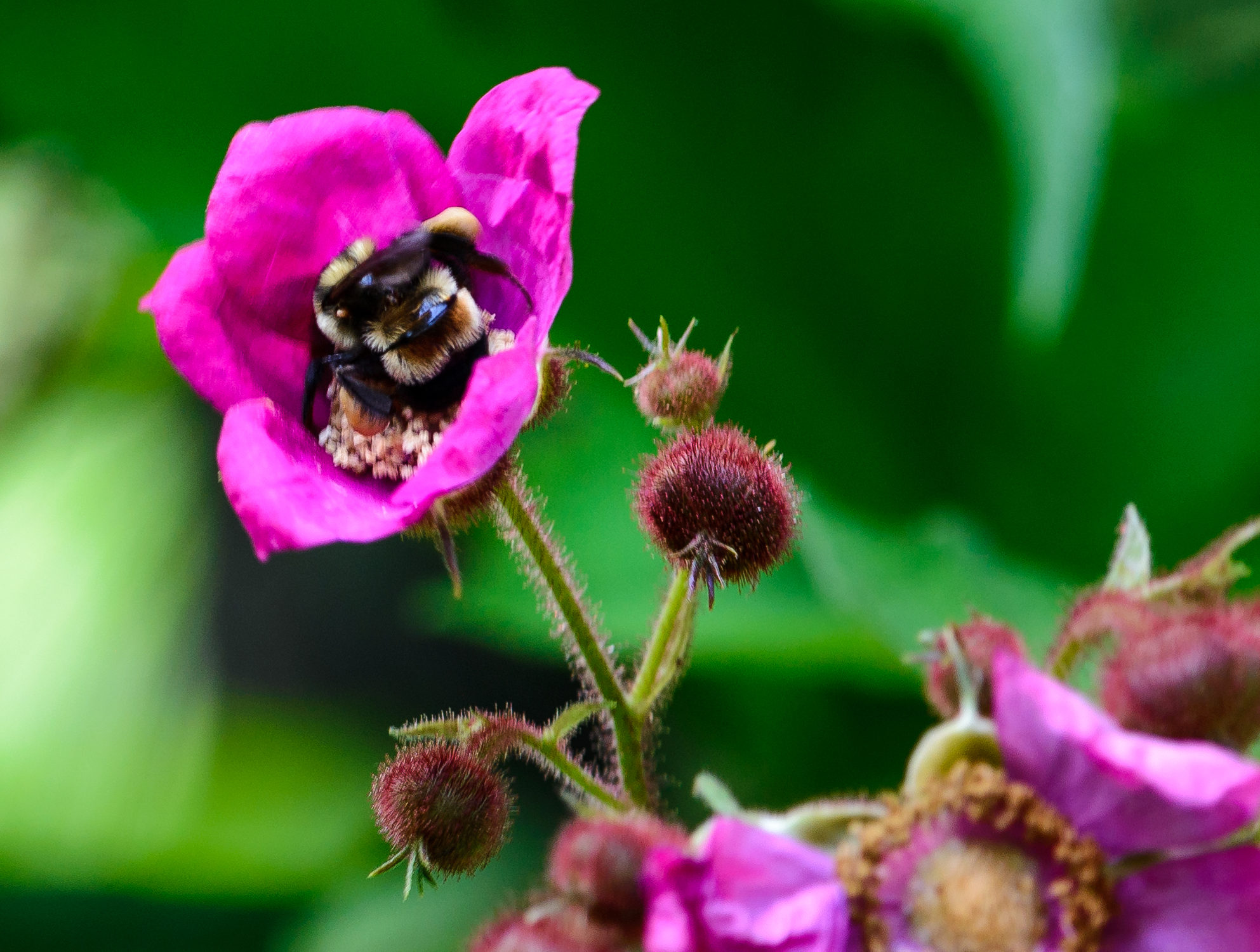